DRD072: Folks, do we have some gems for you this issue: there's even a setup and a punchline. 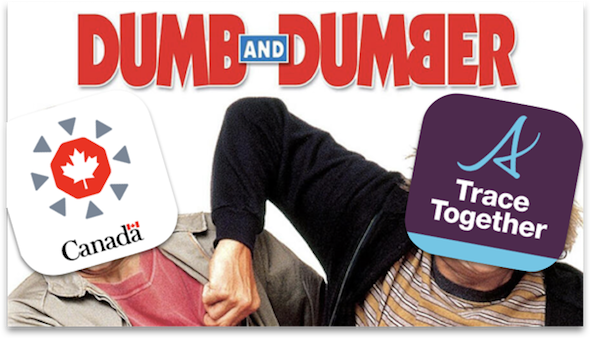 So here we are in the middle of the second wave of the COVID pandemic. Not fun by any stretch of the imagination. So what am I gonna talk about this week? Hey, I’m going to rant about our COVID tracing apps again because…it got worse.

So I talked about ABTraceTogether before. In fact, I recorded a whole video on ABTraceTogether and why it wasn’t going to work. This app was developed by Deloitte (a huge multinational consulting company) and cost our provincial government $650,000 to create…using an Open Source project as it’s base. I’m sure there’s a group of enterprise developers out there nodding sagely, because it costs a lot of money to jump through all the hoops to build health care apps. But I’m also sure there’s a bunch of people involved in startups that look at that $650K and say: “that is bat shit crazy”. I lean towards the latter group. What’s even worse is that since it was developed they were also charged over $300,000 to maintain the back end so we’re approaching something like $1 million now for this app, and this is the good part, the ABTraceTogether app has successfully traced only 70 contacts for 19 cases of COVID since the app was released that’s close to $50,000 per case of COVID.

But wait, IT GETS WORSE. A software engineer in Calgary, Mathieu Fenniak, has torn down both the ABTraceTogether app and the federal app COVIDALert and tested how they work and how they don’t work. The fact is the ABTraceTogether app is so pitifully constructed that there are almost no circumstances under which it correctly logs contacts, which is why we only have 19 cases so far tracked. COVIDALert, though, is much better and operates much as one would expect it to, and works, you know, in the background like it supposed to.

The point I need to make here is that the developers of the ABTraceTogether app are criminally irresponsible in their testing of their app. It does not work and they charged WAY TOO MUCH for an app that does not work. The whole point of charging that much is to make sure, that when peoples lives are on the line, things ALWAYS WORK. And they failed. Miserably.

Sorry, folks, this isn’t a RubyMotion app but it was just too cool to ignore. It lies in the sweet spot on the ACC (App Coolness Continuum) which begins with “why didn’t I think of that!” and ends with “so when is Apple going to Sherlock this?” As announced in a recent tweet from David Smith we present Widgetsmith: customizable, schedule-able widgets. Imagine, widgets which appear on your screen exactly when you need them!

A DRGTK twofer, this issue: first, we love a nice tight little game, particularly when it’s open source! You can just play it for the shear heck of it or, better yet, use it to better understand how to create a similar game of your own. Complete unrelated (sort of), we find it hard to believe that the Pharaohs of Ancient Egypt would have ever imagined their favourite board game would wind up like this.

In addition, from the DRGTK Discord (you have joined that, right?) a short snapper on profile tracing: Dan Healey provided a link to his Zif::TickTraceService. Problem solved.

The other resource you should really join, if you haven’t already, is the Dragon Riders Slack Team (formerly known as the Motioneers). If you were a member, you may have spotted this recent thread regarding a network connections annoyance.

Candidly, we’re not sure saying goodbye to Gson (for Java serialization/deserialization) is a particularly good idea. Sometimes things look old and stagnant because they just, y’know, work. Do tools like awk, grep and sed need to be replaced? We think not. They just need to keep doing whatever it is they have been doing since the dawn of recorded time. In any event, our personal feelings aside, it’s Goodbye Gson, Hello Moshi. Well, it’s a cooler name at least. Sort of.

Before anybody jumps on it, we know we talked about motion-html-pipeline a while back when it was first announced, but we’re featuring it again, because this spec_helper.rb was recently posted. Working code from working projects is GOLD.

Our great community is forever coming up with fascinating tips, tricks and traps. This one is from Seth Sandler, and it’s pretty important. It may also be the reason why so many developers seem to avoid iCloud particularly if they have even the vaguest intention of transferring their app at some point in the future. Which could well be just about everybody, right? Apple should probably fix this.

OK, we may have saved the absolute best for last. For those who use macOS screenshot (which could well be just about everybody, right?) and have cluttered up their desktop with a bunch of images because they weren’t framed correctly, do we have something for you: did you know you can move the screenshot frame by holding the spacebar. Thanks to Jonnie Hallman for this solid gold nugget coated in platinum. Try it. You might just swoon. 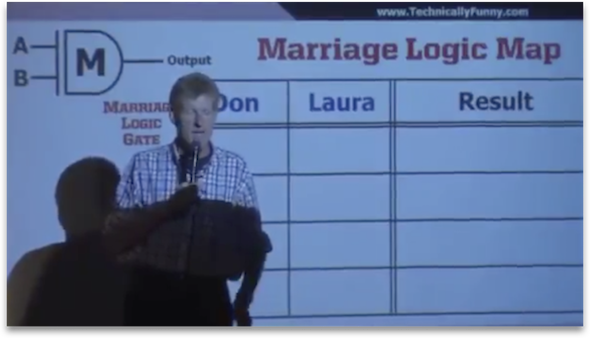 If you are just puttin’ in time on the keyboard ‘til you can finally pursue your dream job of standup comedy, there is hope and this one is particularly for you. We didn’t think AND and OR logic gates could be the setup for the punch line but we’re not anywhere near as sharp as this guy. Thanks to Toon Koppelaars for bringing our attention to this bit. Priceless.

“There is no logical way to the discovery of these elemental laws. There is only the way of intuition, which is helped by a feeling for the order lying behind the appearance. – Albert Einstein