I’ve read a couple of these long Twitter ‘origin story’ threads now, and really enjoyed them, such has this one by Shahid Kamal Ahmad. I thought I should do that, too. But trying to break it all down into tweet sized bites seems like too much work, so figured…why not in the newsletter?

The first chapter…how it began:

I was a typical math/science geek in high school. I loved math and chemistry and physics. I also loved art. Unsurprisingly, my aptitude tests all skewed heavily towards the sciences. And then I got…‘redirected’…by my guidance councillors. This was (and still is) not uncommon for girls. They try and steer you away from ‘inappropriate’ careers. 🙄

First, I wanted to go into geophysics. I was told that I should avoid that. Now I understand, and still disagree, with that advice. Most geophysics graduates in Alberta go straight into the oil patch or mining. But that wasn’t want I wanted. I wanted to study volcanos. Still kinda regret giving up that dream.

My second choice was astrophysics. I wanted to look for and study extra-solar planets. I was told “you’ll never get a job in that field”. Later, I learned that NASA recruited out of my university…oh well. Another dream I gave up.

Apparently pure math (my third choice) was a bad idea too. At this point I was getting pretty frustrated, and looked over all the math related career paths and just randomly picked computer science. And they could not find any objections to that.

Note, this was in the early 1980s—I graduated in ‘82. My parents were comfortably well off, but not wealthy. We did not have a computer. My school was bringing in a computer class…one year behind me. My sole access to a computer was one of the math teachers’ Apple computer that he brought into his classroom about half way through my senior year of high school. When my spare period lined up with no other class in his classroom, I got to go and play with it a bit, in competition with a lot of other kids.

There was no program for computer science at the University of Lethbridge, my home town, at that point in time, so that’s how I ended up leaving home and enroling in the University of Calgary, Faculty of General Studies (the only faculty that first year students could enrol in back then).

I think we’ll leave it there, and talk about university days next time.

This week in the 6 Pack Apps for Entrepreneurs course I’m teaching, I’m talking with the students about the process of hiring developers. I’ve had years of experience with this, but can always use new ideas. So here’s my question: what could a business person or entrepreneur do (or say) that would make you—the developer—think “yeah, I want to work with THAT person”. I’d love to include your thoughts in a future edition of DRD—and in future editions of my class!

The big, big news this issue: DRGTK 3.0 is out! Actually, the story unfolded so quickly that we’re able to report not only the news of the Release Candidate being out, but also that the Gold Master is available as well. It includes “a couple of new sample apps, mouse wheel fixes…and rendering fixes for labels”.

But the part that really caught our attention was this new Pro feature called DragonRuby Replay. Ryan C. Gordon does a great job explaining this in this short video but the low-earth-orbit† view of this is that it actually records the render stream as opposed to some sort of screen capture. The implication is that you can actually play the render stream back with different assets. In other words, let the artist do their thing and then let them re-run the game with their beautiful new graphics.

If that’s not worth upgrading to the still very affordable Pro license, then you probably think everything should be free all the time which, y’know, just doesn’t make sense. Of any kind.

Although they’re not quite in the same league as the headliner, there are a few additional chat room snappers worth bringing to your attention:

We have likely mentioned it more than once, but if we had known how important it is to game development, we would have paid more attention during geometry class. Instead we fattened up on the cinnamon buns they served in the student union building. The legacy of that misspent youth lives on (both the poor knowledge of geometry and the fatness). But then again, who needs to know anything about the subject when you have access to a library that does all the necessary game-related geometry for you—as if by magic. We were reminded of this fact by a recent conversation on the DRGTK Discord. In any event, here’s geometry.rb and some docs.

Imagine if, after preparing and eating dinner, you simply left the dishes where they fell and didn’t touch them until your next meal. Utterly preposterous right? Right?

In that case, why would you leave all the detritus lying around after your tests complete and only clean them up when you’re ready to run the tests again. Like the (probably) metaphorical dishes, you wouldn’t. Or shouldn’t. In fact, the whole process of cleaning up after the tests can be automated and rolled into the testing process itself, as noted by Mohammad Azam in a recent tweet.

Now, if we could just find the equivalent for all those stinking, mouldy dishes.

Let’s face it, the vast majority of games in any garden variety gamejam tend to be of the fantasy/space genre. Not that there’s anything wrong with that. That said, we got a kick out of this recent, highly differentiated entry into the Teeny Tiny DragonRuby MiniGameJam 2021: it’s called Typing Game by inkyvoxel. Very addictive.

Then again, it might also be that it instantly triggered memories of Typing Tutor 1.0. By the way, look closely at that cover. There are part numbers for both the diskette and cassette versions.

Moving right along, if you’ve grown up in the era with SpaceX, Blue Origin and Virgin Galactic, you’ll likely think of the commercial exploitation of space as being a little…well…ho hum. It’s just the way things are done these days. But at the very least you will be able to relate to GalacticSpaceTrader by Dee Shaedler as announced recently on the Discord. It’s described as a “game about spaceship logistics and turning profits on thin margins”. We have to admit, though, that does sounds quite intriguing.

Sometimes we use a term for so long and so often that we lose track of its dubious origins. Quite often that’s in language which is clearly NSFW, so we won’t go there. But how about the terminology ‘master’ and ‘slave’ such as they are used in GitHub? Think about those words for a moment and you will conclude they’re actually pretty offensive. And, yes, words matter. So, GitHub made the decision to migrate away from them.

Of course, if you set aside the fundamental rightness of that decision for a moment, there is the practical issue of exactly how to make that change. Never fear, Steven M. Mortimer has published Five Steps to Change Github Default Branch from Master to Main.

So there, now you have no excuse. 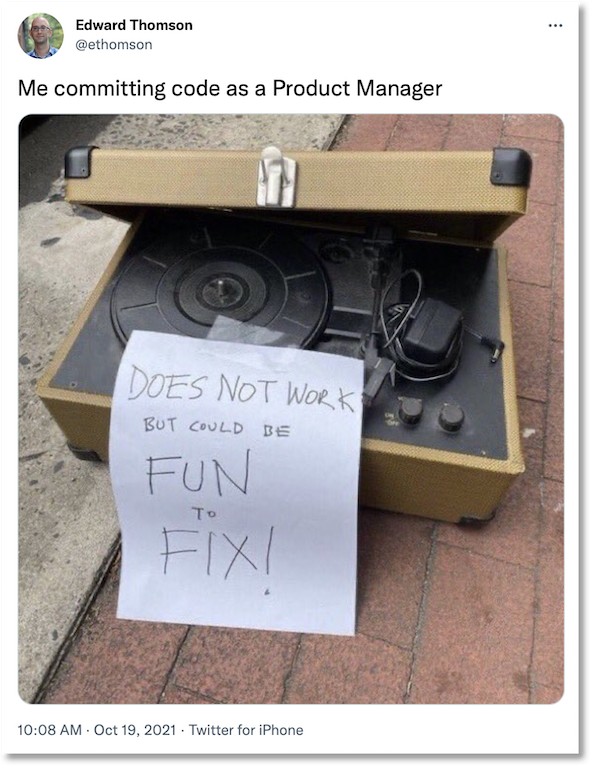