Still can’t use my hand. But at least now I have a cool custom splint to show for it. Hopefully by next newsletter I’ll have my writing ability back, at least part time. So, for this issue I will toss the asylum keys to the inmates, and let the DRD Editorial Staff take it from here.

Candidly, something of which we need to be gently reminded every once in a while is that Open Source Software is not just about plundering a treasure trove of beautiful code for free any time we want. Rather, it’s a fragile two-way street the very existence of which depends on routinely putting something back. Without the latter, the whole house of cards comes a-tumblin’ down. In particular, our reminder this time came in the form of a good soul on the Motioneer Slack who wanted to update an example in the RubyMotion documentation. Good on ya, buddy.

On a completely different subject, if somebody had only told us this in Math 101 at UBC, our dream of a future in aeronautical engineering would have soared. Instead, it pinwheeled into a smoking hole in the ground from which we emerged—code monkeys risen from the ashes. Seriously, the clear-eyed insight in this one, ten word tweet from Freya Holmér is startling, to say the least. 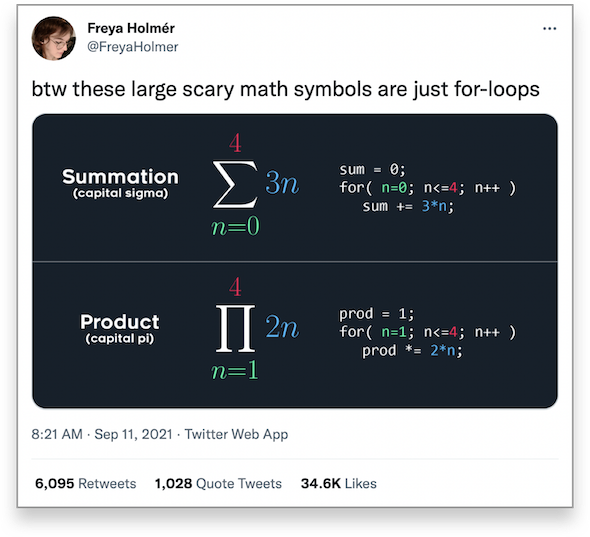 One of the most popular items we run in DRD is news of the various game jams which are running at the moment. We anticipate this issue will be no exception when we pass along word of the TeenyTiny DragonRuby MiniGameJam. We found that on Twitter posted by our good friend Akzidenz-Grotesk who says: “this is a relaxed, beginner-friendly jam with the goal of making short, simple mini-games.” The theme this time ‘round is Out of Control which you can make of what you will.

It seems like this is the Twitter is Simply Misunderstood issue of DRD as we’re finding all sorts of genuinely useful insight on the oft-justifiably-villified platform. This tweet thread from Felienne, in particular, is thought-provoking. It clearly explains the mechanics of making code less English-centric (after all, only 5% of the world’s population speaks English as a first language). Turns out in this broader, multi-lingual context that ‘what constitutes a word’ is a whole lot more complicated than you might think.

It’s nice to see Apple plowing at least some of their jillion-dollar-a-month profit back into some quite amazing innovations. In some ways similar to making code less English-centric, how about making charts less visually-centric. Before you say that sounds like a whopping contradition in terms, look at what Apple has come up with as a way of visualizing data for those who have limited or no vision. Thanks to Stark (no not that Stark) for bringing this to our attention on—yes, again—Twitter.

You probably noticed that something has shown up in the DragonRuby Dispatch email. Yep, discrete sponsored spots like this! We are strictly limiting that to just two per email. So, if you have a DragonRuby-related product or service you would like to get in front of well over 1,200 raving DragonRuby-istas, please get in touch...we would love to help you get the word out!  Sponsored

Our next instalment in the I Can’t Believe I Found That on Twitter! cavalcade is this great little tutorial on implementing tile maps. Sadly, this is a subject which has kind of baffled us—and maybe you too? If that’s the case and you have a little over seven minutes to spare, all will be revealed. Thanks to Brian Knapp for this.

When we first spotted the title of this game we were instantly snapped back to 1985 to Grace Jones’ compilation album of the same name. Oh, those were the days…sigh. We dare say, though, that we are dating ourselves and Island Life by Aquila12 and Jojomo that we found on the Discord will be of more interest to the target demographic.

Do you get a kick out of the mangling of language at the hands of poorly written code? For example, you write ‘return to sender’ on a piece of junk mail only to have more junk mail show up from the same company. But this time, it’s personalized: “Dear Mr. Sender”. If that’s the case and you don’t want to fall into the same trap you need to learn, as we did recently, about PersonNameComponentsFormatter. It takes into account that each “locale has its own set of rules and conventions for how personal names are structured and represented” and then modifies the name appropriately. Thanks to (yet again!) Twitter user Marcin Krzyzanowski for this gem.

Remember all those nice things we said about Twitter? Never mind. File this under things you can do…but really shouldn’t. (tweet: BryanEBraun) 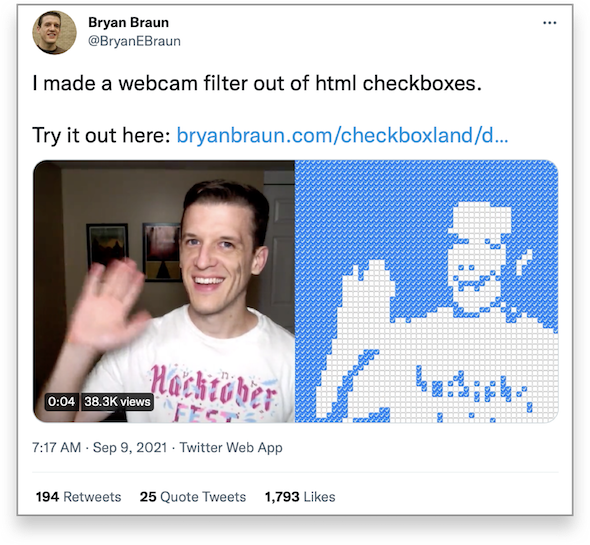 Do you have a newsletter content crunch? Don't have the time or desire to write a compelling tech newsletter your readers will actually read right through to the end? Intellog can help. And they have a special offer: they will curate and write the first issue of your newsletter for free. Find out more.  Sponsored

“The qualities that make Twitter seem inane and half-baked are what makes it so powerful.” — Jonathan Zittrain