DRD092: The all broken bones, hauntings and easter eggs issue. 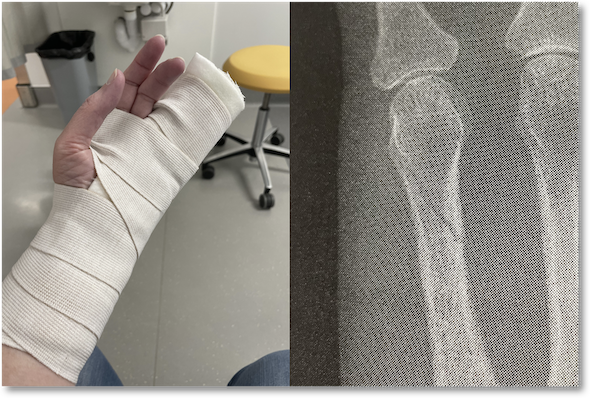 …but that’s exactly what I caught. I was running to go up the stairs, reached for the bannister—missed!—and basically punched the corner of the wall. FFS. And yes, I am left-handed.

From the #show-and-tell channel on the DragonRuby Game Toolkit Discord comes news that MagionDiscord (AKA Oliver Mills) is going to be teaching a game dev course at university. Cool.

Our first thought is that it’s about time that post-secondary institutions started making a solid commitment to course material on the subject. And not just so you can get your parents off your back about going to university when all you really want to do is work on (and play) video games all day. But rather because at roughly $180 billion in COVID-immune annual sales, you wouldn’t want to waste your time on lesser industries—like the movies (at just $136 billion, pre-COVID), for example.

Actually, the trigger for the discussion on Discord was MagionDiscord’s less-than-five-minute presentation on haunted video games. If you’re not familiar with the subject (we weren’t), it’s well worth a look. For Oliver, it was the difference between getting the teaching job, and not.

Over on the ‘more cerebral’ Dragon Riders Slack, there was a brief, helpful discussion on handling clicks on HTML on Android devices using Ruby code.

Although you are too late to take advantage of this year’s edition of the RogueLikeDev’s The Complete Roguelike Tutorial—it kicked off back at the end of June—we’re interested to hear on the Discord that Kevin Fischer has been working his way steadily through it. He just finished Part 11 (!) and has put his work product to date up on itch.io. And the nice guy he is, he is also posting his source code on GitHub.

Also note that this is the fifth year that The Complete Roguelike Tutorial has run, so we think there’s a pretty good chance it will run again next year if you want to join in then.

Do you have a newsletter content crunch? Don't have the time or desire to write a compelling tech newsletter your readers will actually read right through to the end? Intellog can help. And they have a special offer: they will curate and write the first issue of your newsletter for free. Find out more.  Sponsored

Lori left one of her inimitable sticky notes on our desk with a detailed explanation (actually, two unannotated links…but anywho) along with the comment “look what I found while working on the latest Motion in Motion episode!” What they turned out to be—and, seriously, this is pretty cool— is Hwee-Boon Yar’s purplish-layout RubyMotion wrapper for auto layout. The second link—equally cool—was to Mateus’ Rubymotion-Auto-Layout. Both have the potential to be real time-savers.

Zork goes back almost to the dawn of time (well, the late 1970s which seems like a long, long time ago) and yet still seems to sustain interest right into its fifth decade of its existence. To wit, Icculus (AKA Ryan C. Gordon) has released MultiZork which, predictably, is a multiplayer version of the classic game. And about time, we say. Read all about it on GamingOnLinux, an article which includes the quote “not only uses its own programming language, it uses its own CPU”. Now you simply have to read the article, right?

While it doesn’t have the crusty olde worlde zing of Zork, the Lancelot game launcher from Syria-based Rabia Alhaffar is every bit as worthy of your attention. Check out the code on GitHub, then download it from itch.io.

You probably noticed that something has shown up in the DragonRuby Dispatch email. Yep, discrete sponsored spots like this! We are strictly limiting that to just two per email. So, if you have a DragonRuby-related product or service you would like to get in front of well over 1,200 raving DragonRuby-istas, please get in touch...we would love to help you get the word out!  Sponsored

…that “AppDelegate is supposed to be a subclass of UIResponder.” Now you know. Courtesy of, and with thanks to Paul Haddad for bringing this to our attention.

What makes this seriously hysterical is the absolute earnestness of the conversation’s participants until somebody has to explain the humour.

“I tried to allow my children to take risks, to test themselves. Better broken bones than broken spirit.” — Rose Kennedy