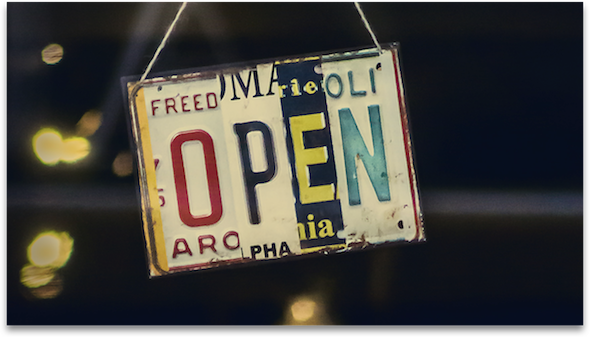 Let’s talk about OPEN SOURCE and community. I know I have been talking about blogging, and sharing your successes on social media being a powerful indicator for the health and growth of our community.

But then, we have our gems. From great big gems and frameworks like Red Potion, to little tiny gems like motion-dynamic-type (featured in January’s instalment of MiM - New Adventures). It’s great when people participate and care (wndxlori/motion-dynamic-type: Pull Request 1). It’s not so great when people discover problems, work around them, and never even log an issue on the project.

You knew there was a rant coming, right? Open source is how we do our jobs. Our paying jobs and side projects DEPEND on SO MUCH open source. And when we don’t participate fully in the system, we drag it down. People create and share their work, so that others may profit from it. But it’s not ‘free’. Making use of open source projects comes with a cost. That cost is participation. When you run into problems, they should be logged as issues, so that others know ‘it is not just them’. When you find a work-around, you need to share that on the issue, again, so that others can benefit from your work. And, especially if you have an employer who is benefitting from using open source, you need to spend some time sharing your fixes back to the projects as Pull Requests. 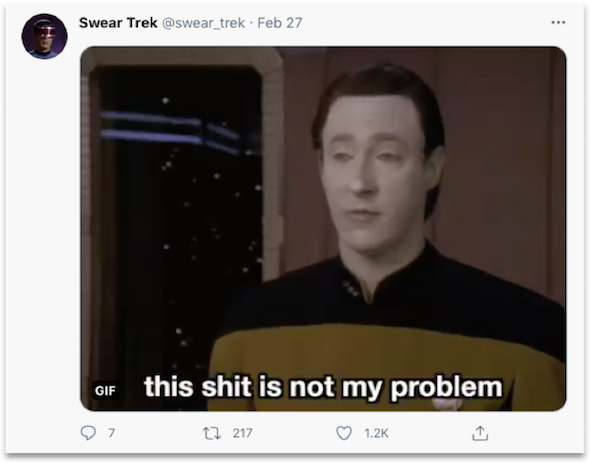 I don’t have an ‘employer’. I work for myself. But I walk the walk (infinitered/ruby-xcdm: Pull Request 26) and talk the talk (rubymotion-community/motion-sqlite3: Pull Request 14). I participate in open source, because I benefit from it, and I want the people who learn from me to benefit from it. You should too. Because this shit IS YOUR PROBLEM. ― WNDXLori

Lori needs to learn a bit of moderation: her new video in the Motion In Motion series has dropped and it clocks in at a healthy 83 minutes of content! Clearly she is very concerned that you are getting your money’s worth so you really want to enroll today.

A few issues back we reported on some of the rather draconian changes at the Apple App Store as well as some of the bun fights in which they have recently been entangled. The really high profile one was with David Heinemeier Hansson and his new startup HEY which is still ongoing as far as we know. Naturally all this heat without an attendant amount of light can’t help but make you wonder about the distribution alternatives for macOS apps other than the App Store. Thankfully, along came Distributing Mac Apps outside the App Store: A Quick Start Guide by Guilherme Rambo. It’s really all you need to start writing your declaration of independence from Apple, if you’re just itching to channel your inner revolutionary.

Speaking of getting the word out (actually, we weren’t, but anyway) if you’re writing articles for the iOS community and are a little disappointed in that 50% read rate (one viewer read your piece and one didn’t) then you need to up your marketing game. The world is not going to beat a path to your door otherwise. The easiest way we’ve seen for doing that recently is to add your site to the iOS Dev Directory so you get listed on iOS Feeds. It’s a force multiplier, for sure.

Our spotlight first turns to the little known gem ruby-xcdm. It’s vital to the use of CDQ but interestingly, it only runs on your Mac. It is responsible for generating your Core Data model file for use in your app. And thank gawd for that, otherwise we’d be using Xcode!

Next, we turn our spotlight on Kota Weaver’s Integrating Ruby and C++ Using mruby and CMake. In case you’re not familiar mruby or CMake, the former is the platform on which the DragonRuby Game Toolkit is based, whereas the latter is a popular, open-source set of build tools. Kota’s video brings it all together so it makes sense in about 20 minutes or less.

The first reports of some minor problems of RubyMotion’s compatibility with Apple’s new M1 are coming in. That didn’t take long. But fortunately neither did the resolution which was covered off in a thread on the DragonRuby Slack. Check out this recent discussion on just that subject.

There can never be too many beginner tutorials. It’s a matter of finding one which is particularly well aligned with your learning style and your area of interest. If you’re looking for a very simple game broken down into manageable steps, Grotesk has come up with a dandy called simple-invader. We found that on the DragonRuby Discord.

Did you know BuzzFeed was founded on a single, simple idea: curated lists of things of one sort or another. Apparently that was enough for them to fall ass-backwards into $3.5 million from Hearst Ventures and SoftBank. Ah, for the good old days of (one of) the (many) tech bubble(s). In any event, there’s obviously no denying the eternal appeal of the list, so here’s one more: Top Games Made with DragonRuby GTK.

If all of those provide some impetus for you to finally kicking off your very own Gears of War-like franchise, it may be that you’re going to need a little help with the UI. If that’s the case, then you’ll be thrilled to hear that there is a new Game UI Database from Edd Coates. With 11,569 screenshots (and counting, presumably) we’d like to think there is something in there which will get you going.

It’s not just a twofer. This is is a threefer. A veritable cornucopia of learning all related to VS Code, as it turns out:

To start, how about an interface to GitHub Projects? We were alerted to this through a tweet by Gant Laborde. All you need to do is add 1s to the GitHub URL as shown in Gant’s tweet. Next up, CodeSnap which enables you to “take beautiful screenshots of your code”. Finally, there’s AppMap for rapidly creating software design diagrams.

That makes it game, set and match VS Code, don’t you think?

In DRD077, we brought you Shit User Stories. Next―and we have absolutely no idea how people come up with this stuff―is Goat User Stories. What could that possibly be? Exactly what is says, as it turns out. 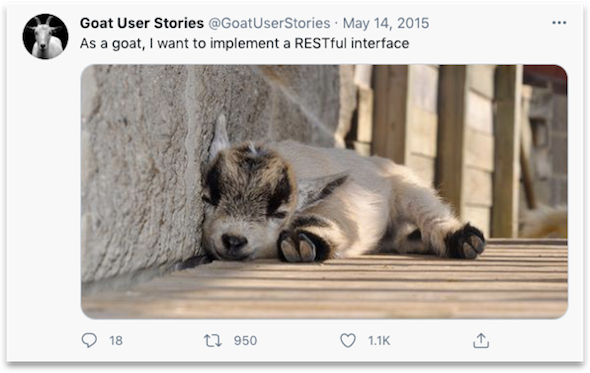 “SCSI is not magic. There are fundamental technical reasons why you have to sacrifice a young goat to your SCSI chain every now and then.” ― John F. Woods