DRD065: David (Heinemeier Hansson) and Goliath, getting fleeced with fleeceware and ignoring all those annoying alarms.

Today we’re gonna talk about the Apple App Store and services that we, the app developers, charge for. This has been in the news lately mostly because of the Hey email app from Basecamp (formerly 37signals). Now the Hey app was targeted by Apple because the app developers were charging for the Hey email service but they weren’t running any of that through the app payment services where Apple could get their Apple tax or 30% cut.

Apple has rules about what you can charge for and what you can’t charge for with respect to your app. If you have a physical product you were selling through your app, you totally do not need to pay Apple their cut and that’s fine. However when you get into these electronic services that’s a fuzzier area. Assuming you have an app that is completely functional without paying for the service then you can probably get away with it. This is how apps like Slack and Trello get by without providing a cut for Apple on their backend premium services.

But Hey didn’t really do that and they don’t really want to do that and therein lies the problem. David and Jason decided this was where they’d place their stake in the sand and they are going to fight Apple on this. I, personally and professionally, don’t think they’re going to win. I also think that you have to be a multi-millionaire to try and make that battle and most of us aren’t (multi-millionaires, that is).

So if you are going to put an app in the App Store and have a backend service that you are charging for, you’d better make sure that your app is completely functional in some way without people paying for the service, if you want to avoid falling into the same trap as Hey. Because the little guys really don’t have the time or money to win that battle. ― WNDXLori

Would you like to share your videos or code examples with a wider audience? We have a YouTube channel with lots of subscribers (hint for the other 700 of you, subscribe!), where your free content can be shared with the community. Or maybe you’d like to make some money from it, but no one (Patreon, Github tips, etc) is supporting your efforts? I’d be overjoyed to add additional authors to the WNDX School, and feature their work right here. Just hit reply and let me know you are interested. I’m working up a document describing how this will work, and I’d love to get your feedback! ― WNDXLori

We have to say that when we first heard the term ‘fleeceware’ we assumed that (save for the typo) it’s what we would find in the latest edition of the Patagonia catalogue. Oh, how wrong we were. Turns out it’s the latest nefarious practice which involves keeping an app compliant with the turbid guidelines of the Apple App Store (see #OPED, above) and yet permits the vendor to extract exorbitant fees from the app’s unwitting users. What makes this practice particularly egregious is that it preys on people’s fears to ramp up fees. iPhone Apps Warning: You Should Remove These 3 Highly-Rated Apps by David Phelan of Forbes explains.

Ah, those were the days when being an MVP got you into the Hall of Fame of some pro sport. No, today, it means ‘minimally viable product’ which in turns means the absolute minimum you can do to prove the merit of your idea in the marketplace. The high marks in this category go to the one who does the least. Seriously. In which case, we have a new winner: Doge It 0.1 by Onlymatt. But all joking aside, Onlymatt has got something working and SHIPPED IT. No matter what you think of the nuances of his game (or rather the lack of them) Onlymatt is miles ahead of everybody still sitting on their great, but still not quite perfect idea.

Get your concept out there, folks, fail fast and then iterate.

Back in DRD062 we mentioned the DRGTK had been included in the amazing Bundle for Racial Justice and Equality. The sweep and coverage of the Bundle is so vast a YouTube series has been launched which is dedicated to provide first impressions of its content. The DRGTK’s turn to be reviewed just came up and while the host ‘Brandon’ says “I did a terrible job of introducing it” (actually, it really isn’t that bad!) we’re putting this video squarely in the category of there is no such thing as bad press. To be candid, it’s a pretty good representation of what it’s like to bootstrap yourself into a new product with which you have no prior familiarity. Nice work, Brandon.

The big news in the Dragon Riders Slack team this time ‘round is that the RubyMotion 7.6 release is complete and out in the wild. That’s another significant milestone achieved: for those who have been waiting for it, it has support for both Xcode 11.6 and Xcode 12.0 Beta. Congratulations to Amir and his team for getting this out so promptly.

If you have grown dismayed that Android Push Notifications are sent through the proprietary Firebase Cloud Messaging (FCM) platform, there’s a solution at hand: Android OpenPush. This is particularly significant because use of FCM renders products which depend on it ‘non-free’ software. It’s nice to know you now have a ‘non-cost’ choice, at least. The product was kicked off at FOSDEM ‘20 in Brussels back in the days when live conferences were still a thing. The event page has some additional resources which are also helpful.

Maybe we’re just a little slow on the uptake but we simply assumed the likelihood was pretty small that ‘apple’ on GitHub was the actual Apple we all know and love (?). Apple does open source? Who knew. Not us, apparently. The particular project which catches our eye is password-manager-resources which was brought to our attention by a recent tweet from Apple-ite Pepijn Bruienne. As it turns out, Apple has a bunch of projects on their GitHub site, so take a browse next time you’re in the neighbourhood. 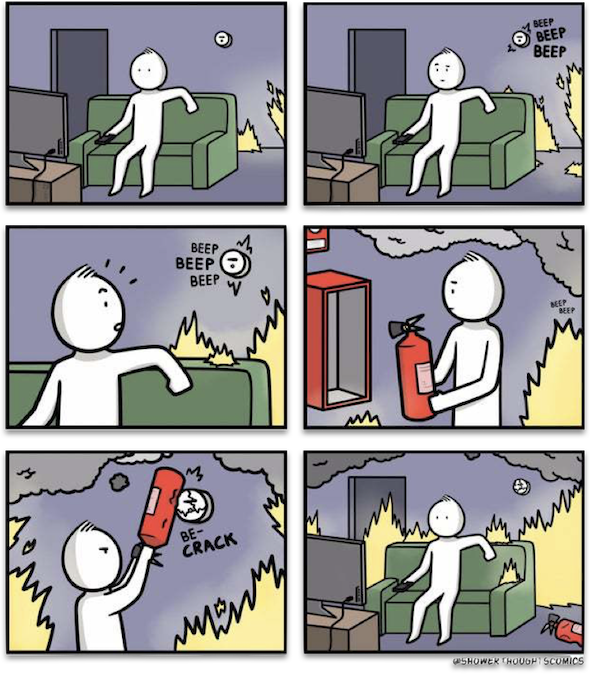 “artificial intelligence is no match for natural stupidity” ― Albert Einstein