DRD056: Your one piece of email this week which will not contain *that* word. Anywhere. Not even once.

Today, we’re going to talk about creating apps and the slippery slope of adding additional features before you ever get to the first release of your app. You see, one of the things that people like to add, especially when they have a community or a membership based app, is allowing users to message each other.

Ok, this is a very slippery slope, as you can see from this post by @dermdaly and can evolve into a monster set of interconnected new features to add, when it seemed really quite simple. Yeah, no.

Not only is it not simple, but if you’re talking about messaging and you let people, say, add media or pictures, then you’re going to run into the pants problem and well, let’s just say the pants problem is a problem that is still not solved. I mean, I just got one of those last week on Instagram. So be careful what features you agree to add to your new application!

Wow, we’re not kidding, producing a ‘greenfield’ course (in other words, from scratch) is a lot of work. But WNDXLori is getting there. Programming Fundamentals with Ruby is now in stealth launch mode. That means it’s not being advertising widely which means you are entitled to a limited-time discount. And maybe even contribute your thoughts and shape the content? We’re really excited about having out there ‘in the wild!’ Marooned at home? Spend that time learning Ruby!

Oh, this is huge and we don’t know how we missed this up until now. Amir just posted a link to an Objective-C to RubyMotion Converter. Where have you been all of our lives? It’s a great example of the really valuable stuff you can find every day on the Dragon Riders Slack. You really should join post haste.

We’re continuing to bring you increased Android coverage and we have a couple of interesting items in this issue:

Are you one of those folks who is constantly putting off those Java updates? Us too, they’re a PITA. The implication? You have to elegantly deal with multiple Java SDK versions on the same machine. Not possible? {Java} Streets thinks you’re wrong about that.

Also on the Android front, do you think the whole themes vs styles is confusing? Here’s a great article from Google developer Nick Butcher on that very subject. Now you really know.

BubbleWrap is one of our favourite gems and has some great new functionality which goes well with the preamble. Look what you can now do with the camera. Options include :allows_editing, :animated…for the rest, well, you’ll just have to check out that link.

A couple of really helpful items from our COMM this issue:

For a while now the “must release with iOS 13” Sword of Damocles has been hanging over our collective heads. Sarun has a great post about Modality Changes in iOS 13 that will help. We’re totally committed to helping you make the deadline before that sword falls. That’s providing pretty good motivation.

Also, buried in a long thread triggered by Aijaz Ansari’s recent tweet about debugging with print statements (hey, whatever works, no judgement) is a reference to a great post by Tom ‘Atomic Bird’ Harrington on debugging with emoji. Yes, emoji†. You really have to take a look.

Sean McMains is our type of person: he’s a self-described “learn-by-doing kind of guy”. You can come up with one-hundred-and-one excuses not to release your app into the app store, or you can do like Sean does, and take the autodidactic†† fruits of your labours and put them in the app store. We think Sean’s approach is the right approach.

You really want to check out your social feeds for #7DRL stuff, there are amazing things coming out of that effort. Here’s a couple of our favourites so far:

On the pure gaming side, there’s Dungeon Crawler from Jason Ormes. You really wouldn’t think something of this quality could be produced under the constraints of #7DRL. But it obviously can.

But #7DRL is not just for games. Ruby LibHunt has a bold illustration of subjects from an “awesome talk by Squirrel Eiserloh”. Who knew so check out the app.

Now DRD is published every other week, we should probably change the name of this section. Or maybe we’ll just leave it as a quirky artifact from whence we came. In any event, this is a few months old but still a very handy tip: Clearing Your App’s Launch Screen Cache in iOS from Guilherme Rambo.

Don’t show this to any kid under ten otherwise anything from Disney will give them nightmares from this point onwards. Behold Sebastian the lovable Jamaican-accented crab bringing The Little Mermaid Ariel up to speed on the nuances of programming in C. We truly do not know where folks come up with this stuff. Candidly, it might give us nightmares. 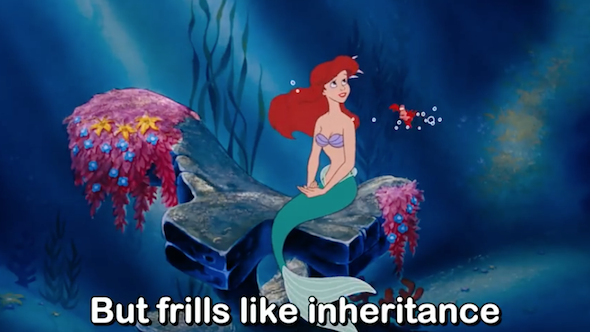 Still don’t want to miss the next edition of The world’s best DragonRuby newsletter? Then you had better subscribe and every other week DRD will come to you absolutely free! We’re also on Twitter and Instagram and we really hope you’ll follow us there for content you can’t get anywhere else.

†Think the plural of emoji is emojis? Think again. We checked with the Emojipedia. And yes, that is as thing.