Ok, this is only my opinion, but… if you don’t have a sacrificial computer to dedicate to the computer upgrade gods… don’t ever upgrade your operating system on an X.0 release. At least wait for the X.0.1. And with that, we have our reminder from Amir to NOT upgrade to Catalina yet, because you won’t be able to use RubyMotion. 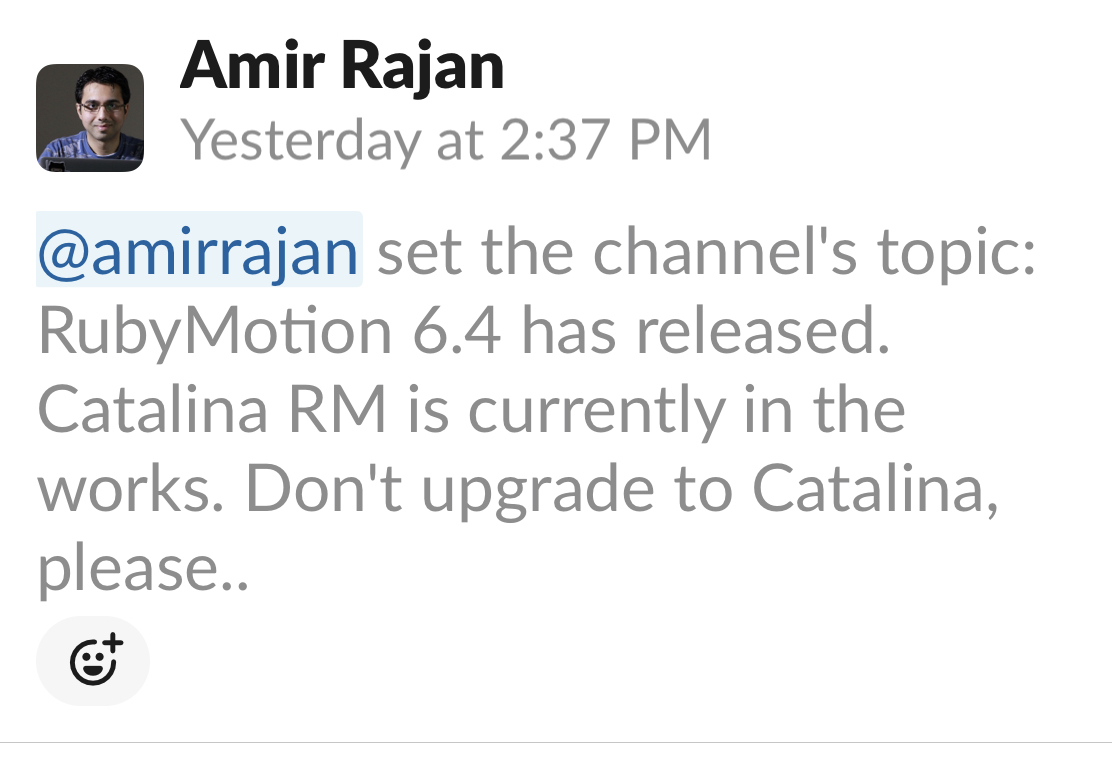 We thought this item belonged in two categories: not only was it a nominee worthy of the #AHOTW accolade, but it also was a beautiful exercise in the effective use of the DragonRuby Gaming Toolkit. But then again, you should probably expect that because the author is our friend Amir Rajan, the father of the #DRGTK. What’s even more impressive? Clepto Frog was Amir’s submission to Ludum Dare 45, “an online event where games are built from scratch in a weekend.” An impressive accomplishment for both Amir andthe #DRGTK.

#FITS — Featured in the School

There is nothing new in the school this week, but we have a good excuse. We finally felt we had accomplished all that we were going to with Drip and are moving on to the ConvertKit mailing list manager. Ideally you shouldn’t notice anything different other than the #RMW will look better than ever and may even include a few new visual doodads down the road. We sincerely hope it all worked as planned and our faithful, multitudinous audience is reading this now. If not, we must have screwed up. Then again, how would you know you weren’t reading it?

In this week’s highlight from the Dragon Riders Slack, regular contributor Mark Rickert announced he has released version 1.3.0 of his reset-simgem. It’s a significant step forward as Mark mentions it “no longer requires the Simulator app to be open to reset it.” We agree, Mark: “simple but useful.” You can find the source on GitHub.

We think there are few things which positively impact the fit ‘n finish of an app more than the consistent and rigorous use of a good visual theme. Not only will your app look better, it will actually be easier to use when it has a consistent visual language. All that said, use of themes can be tricky. Jorge Castillo provides a great overview of how Android themes work and how they utilize dependency inversion for applying the theme to your app. Jorge also talks about how to customize themes to truly make them your own.

Last week we kicked off a multi-part series on the use of BubbleWrap. In that first instalment, we covered reactor. This week we continue with location which covers the always fascinating subject of GPS and compass use in the CoreLocation framework. The latter is definitely one of the more hairy API’s to use, so it’s nice to see BubbleWrap has provided this convenient wrapper.

While we’re not quite sure why everybody seems so down on Twitter these days (although we do have an inkling) we still think of it as a treasure trove of useful information. To wit, Peter Steinberger has this great tip on how to avoid the carnage of testing on Catalina without scrollbars showing rather than both with and without. Rolling your app out without that might have them laughing at you, not with you. Or, maybe, they will think you’re leading the pack with a whole new visual style trend.

#TWIL — This Week I Learned

We truly, madly, deeply believed what this world did not need was another shell. Jonathan Turner, Yehuda Katz, Andrés Robalino and Odin Duttonproved us wrong with their brand new effort nushell. Not nutshell, the way we first read it, but nushell. As in new shell. In any event, check it out and see if you can’t be convinced, too. We certainly were.

Until next week…some words we live by, attributed to Tyggy the Dog: “Sit rather than stand. Sleep rather than sit. If you can’t sit or sleep, then eat.”