If any of you happen to follow me on Twitter or Instagram, you probably already know that we got a new puppy this summer. His name is Scooter, he is a miniature schnauzer, and he is adorable. Like all my puppies, he has a unique personality. One of the funnier things to watch him do is taking toys out of the dog toy box to play with. He keeps going back, over and over, to pull out yet another toy, even though there is hardly a square foot of our living room that you can walk on without stumbling over a toy. Eventually, there are too many toys, and he just wanders from toy to toy to toy, trying to figure out which one to play with, but never actually deciding. That’s when we intervene, and put all but one or two of the toys away in the box. Then he can focus on just the toy he has in front of him, and he can enjoy playing again.

You might wonder where I’m going with this, but I do have a point. You see, developers frequently get caught up in all the shiny new toys, and have to try all the new things, and read about the other new things, and oh, there’s a new book about this other new thing, and… Yup, we’re a lot like my little attention-deficit puppy. Sometimes it pays to put away all the shiny new things, leaving out only one, and then concentrating on it for a while. Get to know it, and really enjoy working with it.

Featured in the School

Hey folks. I’ve had time now to go over the results of the RubyMotion Developers Interests poll. Seems like most of you are interested in iOS development, followed up by macOS. Android is a distant 3rd place. I found that interesting, because we get a lot of Android questions, but for now, we’ll be concentrating on iOS. On the second question, it seems like there is no clear cut winner for what you need the most help with. A very slight edge for the top three, Building UI’s, Multithreading, and Testing. Here’s the detailed results. Expect to see more iOS and macOS topics in the school this year. 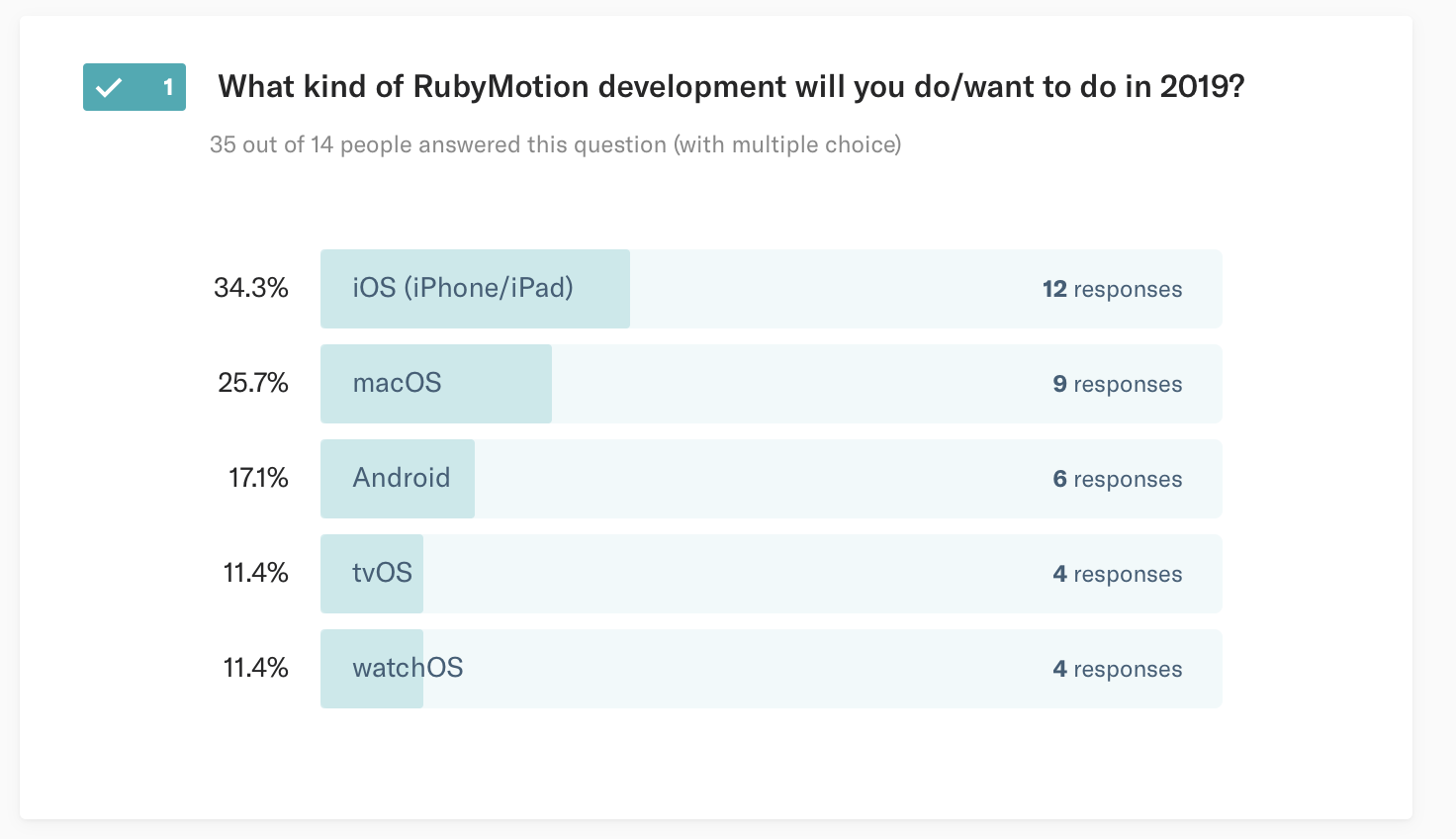 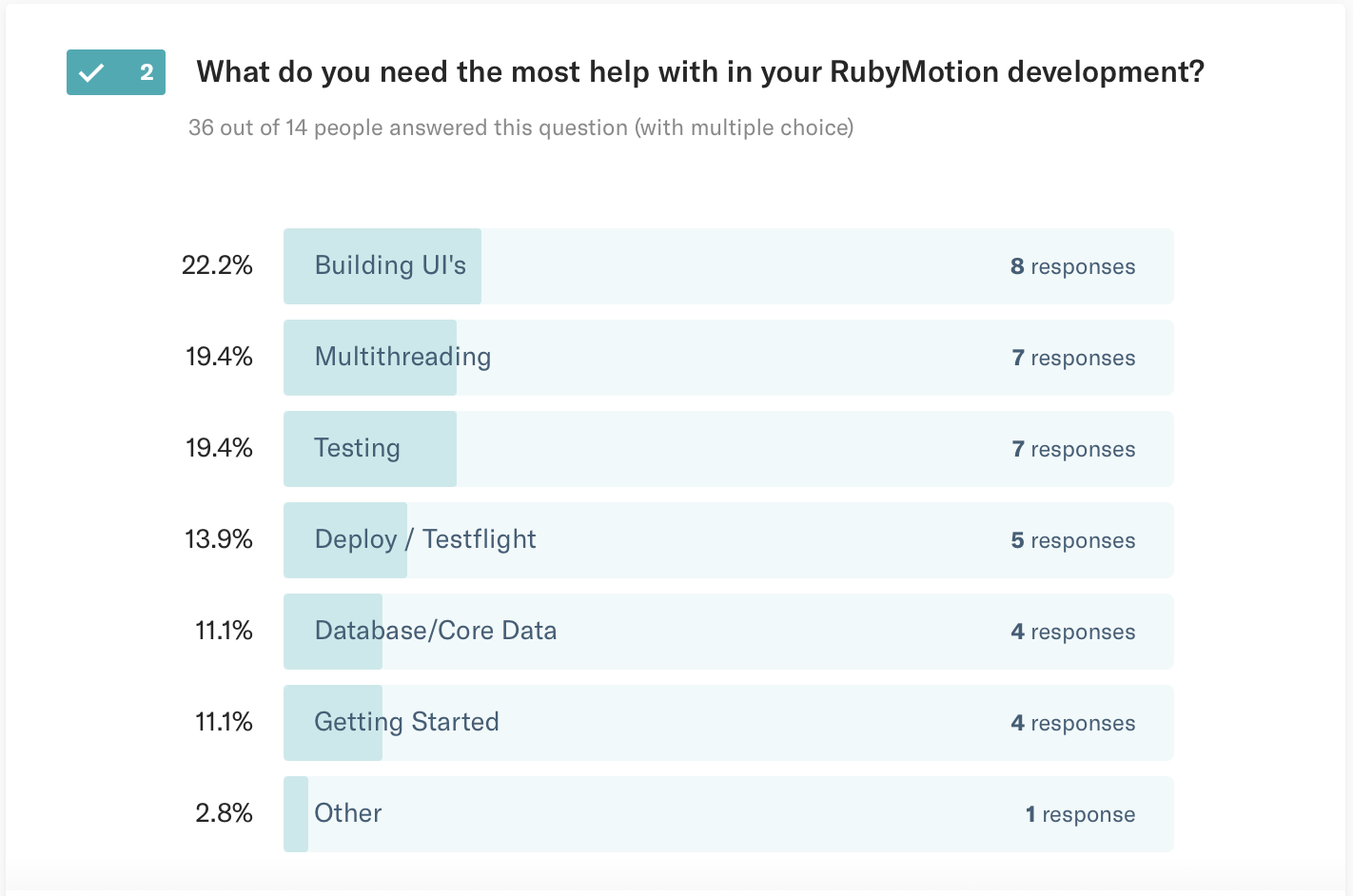 “Is there any way to make test turn around cycle faster”, Matias Forbord asked last week. Like a lot of Rails developers, used to gems like rails/spring that help speed up development and testing by keeping your whole Rails app preloaded, Matias found the whole compile/link cycle rather slow. While there are no perfect ways to solve this problem, Dave Trollope pointed out that if you have a lot of tests, you can speed things up when working on a focused area by only running the tests related to that area:

And if you haven’t signed up for Slack yet, you can get access by going to motioneers.herokuapp.com.

Gem of the Week

Not really a gem, or even a CocoaPod, but Twitter has released it’s scalable feature rich network layer on Github - twitter/ios-twitter-network-layer, or as they like to call it TNL. The best part is that it’s examples are all written in Objective C, so there should be no problem using it from RubyMotion.

Still quiet in the community forum. So this time we’ll reach out to the Ruby community at large. Tired of Twitter? Maybe you’ll find the Ruby focused Mastodon community to your liking. I have to keep reminding myself to go there. It’s such a breath of fresh air compared to Twitter these days.

And here’s your reminder to introduce yourself on the Hello World post on the community forum!

App Highlight of the Week

Psst!!! If you have an app (even if it’s not in the App Store) send me the details, and I’ll add it to the list to be featured!

TWIL (This Week I Learned) Links

That’s it for this week!